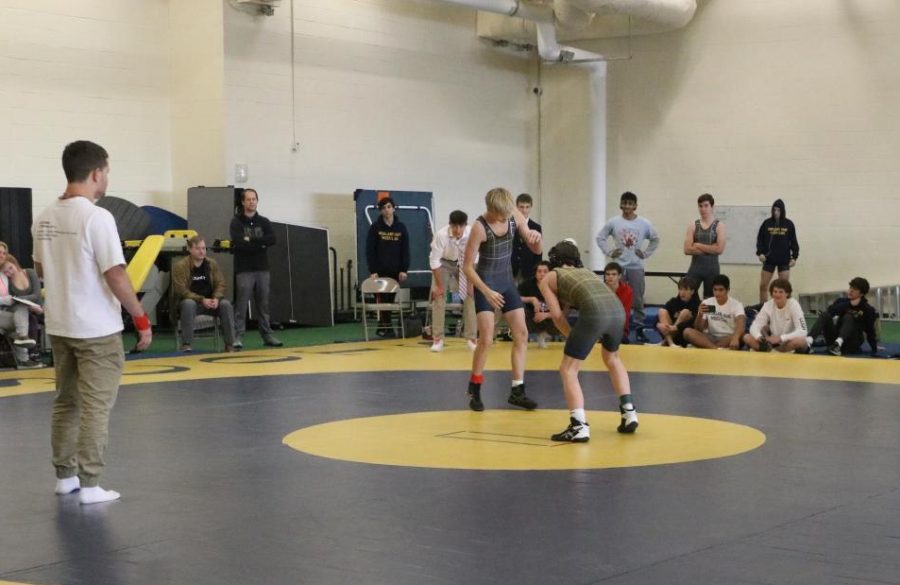 The boys varsity wrestling started their season on Nov. 13, but have been preparing long before then.

Coach Timothy Marzuola has been the head wrestling coach for 39 years and is looking forward to the season.

“We start [training] the first day of school and start working [the boys] out,” Marzuola said.

The season is divided into four phases. The first is focused on getting the players into shape and the second is geared towards teaching basic technique. The third and fourth phases pick up in intensity and are meant to get the players into a physical mindset.

The shift of the start of the wrestling season has taken place by focusing on teaching and physical demonstrations. The team began the year practicing for two hours.

“We’ve been practicing since the first day of school,” assistant coach Tyler Williamson said. “The practices are a little bit longer and are more intense.”

“[We practice by] doing multiple workouts a day, not only at the school but outside of the school too,” Wasky said.

Marzuola believes mental strength is just as important as physical strength. He encourages the wrestlers to stay concentrated on the sport.

“I think that motivation comes from within, not from without,” he said. “We talk to the kids about being focused everyday. Everything we do in the practice room has a purpose in preparing the kids to become as competitive and as efficient on the mat as they can.”

Williamson has a similar desire to motivate and help each wrestler.

“Working with wrestlers can be difficult since there’s a lot of different personalities, so each wrestler is going to be a bit different,” Williamson said.

Williamson believes the camaraderie between the teammates is an essential part to building a strong team.

“Ultimately it comes down to the relationships and getting to know the kids as individuals because they’re all going to have something different about them [that helps] motivate them,” Williamson said.

He feels coaching and wrestling comes with great responsibilities for both coaches and captains. There are elements to wrestling that can go unnoticed, but play a major role in having a successful season.

“There’s a lot of different aspects when it comes to taking care of equipment, scheduling and there’s a lot of things behind the scenes,” Williamson said.

Waskey agrees. His role as captain means he is an essential part in moving the team towards victory.

“As a member of the team, there’s a lot of responsibilities,” he said. “You have to take it upon yourself to reach a certain weight class to help the team.”

Williamson understands the demands that come with wrestling and emphasizes the diligence required.

“[Making a good wrestler comes down to being a] hard worker, it’s going to come down to putting in effort,” Williamson said.

Marzuola believes wrestling is a complex sport that requires lots of commitment and tactical thinking.

“[Wrestling is] like any individual sport,” he said. “It depends on what level you’d want to achieve. If you want to become a successful wrestler at the high school level you’ve got to master a lot of techniques. There’s a lot of strategy. Some people call wrestling the chess match of sports.”

The team will next compete against Marcus High School on Nov. 19.