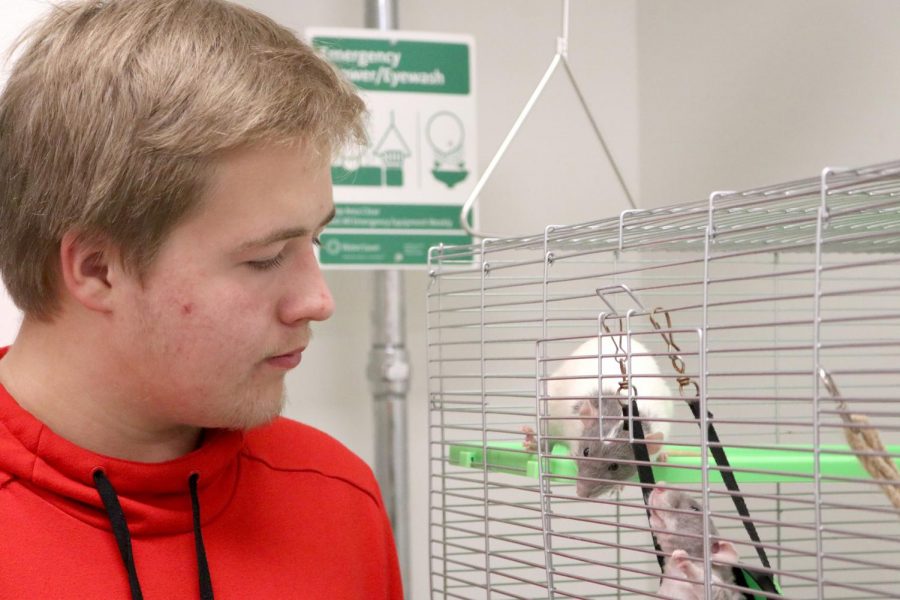 In honors biology, freshman Richard Wilmot watches the class rats play. He has observed them everyday before class starts. "I am interested in how they behave," he said.

“I think pets make teachers more personable and kids more comfortable in the classroom,” Townsend said. “They create a more inviting atmosphere, which makes kids want to be in your classroom, and kids want to learn from people they like.”

Townsend has brought three pet rats into the classroom. She found these pet rats on an AP Bio Facebook page and proceeded to adopt them.

She originally bought five rats for the classroom, but two died due to genetic problems. Previously, Townsend had a pet snake for the class named Greg and was eager to get another pet.

“Everyone loved him, but he didn’t like being held, so I wanted a more social pet to engage with the kids more,” Townsend said.

She adopted all males rats because they tend to be calmer than female rats. The species of rat she bought are Dumbo rats due to their large ears, and these rats usually live for two years.

“I like that they die quickly, so I won’t have to have them forever,” Townsend said.

Unlike wild rats, this species does not bite or carry diseases because they are domestic and born in captivity.

“They haven’t been in the wild to have gotten bitten by rabies,” Townsend said. “They never have really been outside of a cage.”

Townsend named her three rats after scientists: Alfred, Theodor and Louis. These rats are self cleaning, so she never has to bathe them, and they only need an hour of exercise a day to stay active.

“I let them run around the room, but not when students are in the classroom,” Townsend said. “They are good to work with in small groups, but if I let them all out with all the students, it would be too crazy.”

“They add to the classroom environment, and they make class less stressful,” Xia said.

Freshman Charlie Thompson, who takes honors biology, thinks the rats do more than just add an element of relaxation to the classroom.

“They add something to look at [in] the classroom and show that this is biology class,” Thompson said. “They are good examples to show how organisms act.”

Townsend has seen students that aren’t in any of her classes come and visit her rats.

“They lure people into the classroom, which makes people want to take part in biology,” Thompson said.

Rats are known to be intelligent and social animals and have helped the students open up more.

“They come to the edge of the cage to get fed in the morning by kids,” Townsend said. “They are fun and easy, and they are like ice breakers for me and the kids.”