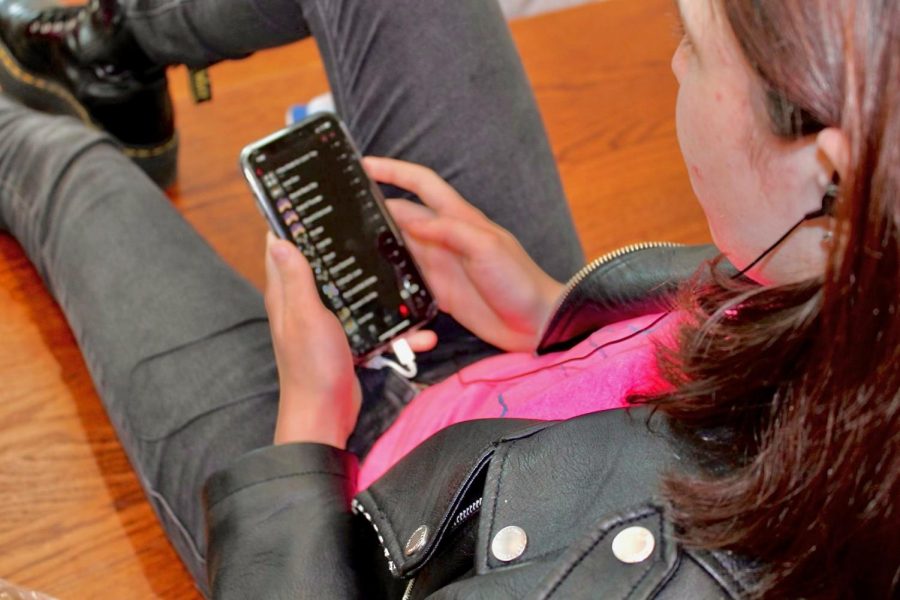 On the Apple Music app, freshman Ashley Schumacher listens to her favorite songs by Led Zeppelin.

Current songs and musicians can’t – and never will – compare to the legends and lyrics of older music.

Music is a form of art in which everyone has different tastes and appreciates different things. Admittedly, there are current songs that are enjoyable, and various kinds of music have their own artistic qualities.  However, on the whole, older music wins the “battle of the bands” hands-down.

Music that is now more than 20 years old, especially love songs, was much more personal than those recorded by more current singers. The writers infused the majority of songs with personal experiences, with which the listener could identify.

Today, songwriters and artists attempt to broaden their demographics and sell more singles by appealing to a larger audience with fewer specifics in the story of the song. Marketing is the most important factor in regards to an artist’s profit, so they have to be less individualistic to gain popularity and increase their fan base.

Music from the 1950s to the 1990s was written with a sense of emotion and focus on events in the songwriter’s life. For example, the hit 1981 song “Jessie’s Girl” by Rick Springfield describes the girl he yearns for with passion and vocal drama.

Famous classic rock band, Led Zeppelin, recorded love songs touching on the experiences of the band members and their new loves, pain, and heartbreak, as well as passion.

Songs from those earlier years typically contained lyrics that spoke to people’s hearts and minds and touched their souls. Most love songs today do not incorporate those details and describe a love so vividly.

Critics of early rock-and-roll cite the quality comparison of the recordings. Current popular music is influenced by advancement in technology, which appeals to many younger people.  New digital recordings improve the quality of recordings and provide clear and crisp sound detailing of the instruments, without the scratchy quality of vinyl or tape recordings.

Technology can also create new sounds and mechanical tones to overlay other components and act similarly to harmony or accents to the music.

But older rock music was more versatile, even if in some instances they were recorded on less-than-clear media such as vinyl or tapes.  The music of earlier years included many combinations of musical forms from the development of early rock, swing, soul, Motown and heavy metal.

That music emphasized the voices of the singers who had perfected their pitch, tone and the notes of the instruments that themselves sounded like voices.  A quality musician didn’t need to have their voices or keys adjusted or “autotuned” in a sound studio as many artists do today.

Though, the sound quality of music recorded in the past few years is impressive, more modern songs lack strong singers or bare vocals, and the layers of mechanical sounds and studio-created sounds take away from genuine music.  When the instruments and vocals drive the song, the emotions are easier to connect with and the familiarity generates warmth and fondness.

In addition, songs from the past have recently been remastered. In the remaking, the sound quality is equal to that of songs today with assistance from digital influences, and listeners enjoy the best of both worlds.

Past music is also generally more original and stands out more in the minds of listeners. More recent songs reuse old tunes, tones and melodies and, in some instances, reuse phrases and pieces of older songs.

For listeners today, older songs can bring a feeling of comfort and trigger memories that newer songs simply cannot, according to online culture publication Mic. The earlier music has stood the test of time, and has played enough to seep into our subconscious and warm our hearts.

When taking into account nostalgia, lyrics and melodies, new music simply doesn’t compare to that written before 2000. The next time you cue up your music streaming platform, try an older record instead of the hottest new pop song.