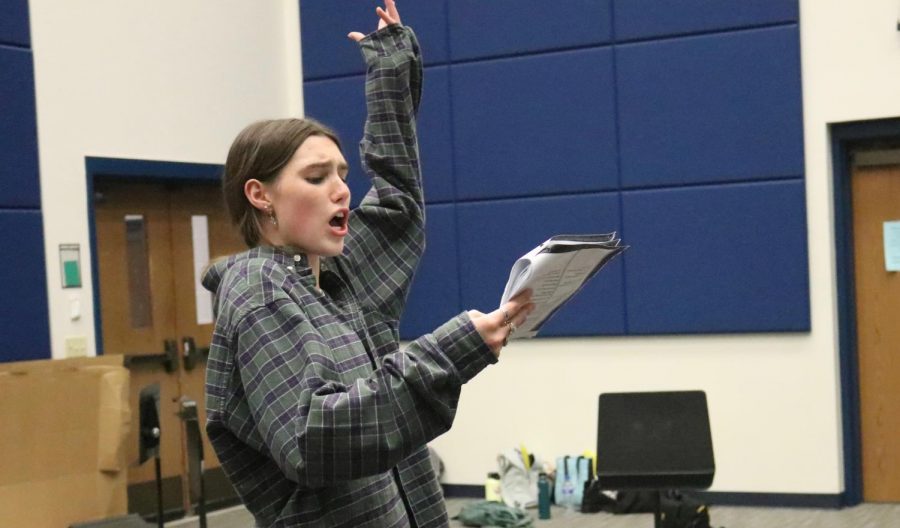 During play rehearsals junior Julia Smartt reads lines in the orchestra room. Smartt was cast to play Ralph even though she originally wanted the part of Jack. "I was very excited for Ralph when I found out," she said.

The theater program plans to present “Lord of the Flies” in the orchestra room on Nov. 13.

“I was trying to find something that is a really good script, that the actors would enjoy but also engage the student body as a whole, and “Lord of the Flies” seemed to be a popular story amongst everybody,” theater director Tyler Perring said.

“Lord of the Flies” is set during World War II and tells the story of a group of boys stranded on an island. As time goes on, the boys start to exhibit savage and violent behavior due to the lack of parental guidance.

““Lord of the Flies” is my favorite book, and I have read it multiple times, so I am pretty familiar with all the characters,” said junior Julia Smartt, who is playing the lead role of Ralph.

Auditions were open to all students on Sept. 30.

“The first round of auditions [the students] prepared a monologue that they performed in front of me and Heather O’donnell, and they had a three minute spot [to] perform their monologue,” Perring said.

After the auditions, a callback list was released, and the callbacks were on Oct. 1.

“Perring had us do a cold read, which is where we read scenes [for the first time], and then the cast list came out the next day,” Smartt said.

Rehearsing times for the cast are usually after school everyday from 4 to 6 p.m. in the orchestra room. This is the first time they plan to premiere a theater production there.

“I thought it would be a lot more powerful if the audience was closer, and we can’t really do that in the auditorium,” Perring said. “It’s very much in your face drama, and you’re in the action, and if you come see the show, you will see the sweat, and you will see the blood flying, and you know you will get to experience the deaths very close up because they happen 7 to 8 feet from you.”

Early on during the play’s production, the cast would read through the script aloud to become familiar with the characters and script.

After the cold reads, the theater broke the show up into scenes, and they came up with titles to help them portray certain moods. Perring had the actors participate in movement-based exercises to establish trust among them.

These movement-based activities are known as blocking led by freshman stage manager Annie McGuire. Blocking is the process of learning the movement of a character and other characters around the stage and what exactly a character is doing and how they are doing it.

“I report all the blocking, making sure everyone is in the right place, and I keep track of people,” McGuire said. “This is my first time being stage manager, [and] it’s been really fun actually being able to connect with [the] actors and [being a part] of the group stuff. Perring is a great director, and it’s fun to work with him.”

Perring said theater takes a lot of commitment because the cast has to make their own costumes and set in addition to attendance at rehearsals.

“The reward is so great because when you get to put on a show that has meaning behind it and that has a profound effect on how people view things, we are bringing a book to life that everyone has known, and they get to come and see it. It makes all that hard work worth it.”

Perring also encourages students to come to see “Lord of the Flies.”

“The goal is for the whole student body to come watch it because it is something that if you [are] a junior or a senior, [then] you read this story last year or the year before,” Perring said. “[There is] something different about seeing it on stage and seeing the characters come to life. It’s like if you watch a Harry Potter, and you get to see them come to life, that’s what we are trying to do.”