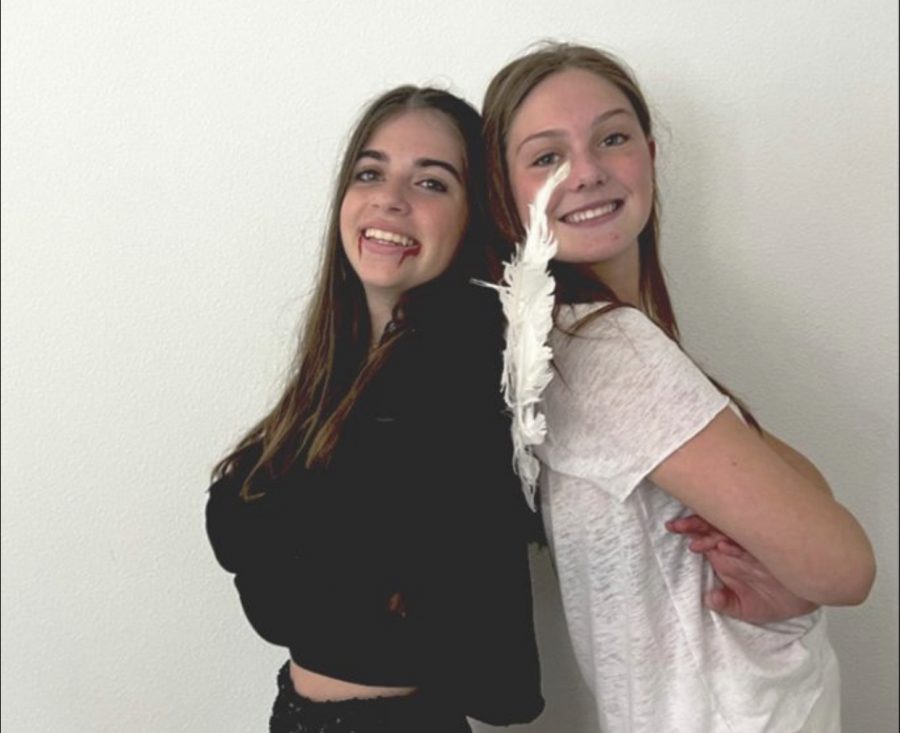 Sophomores Abbey Gross and Caitlin Istre dress up in their trending Halloween costumes. Gross is dressed as an angel and Istre is dressed as a vampire.

Decorations, haunted houses and candy fill up the month of October, but another aspect of Halloween is the costumes.

Every year, girls contemplate what they are going to wear for Halloween.

According to Stylcaster, “typically, popular Halloween costumes are classics—like a witch, a skeleton, or a cat—but instead of keeping to tradition, we’re looking to what’s trending within pop-culture.”

Sophomore River Morin is dressing as a devil and her friend, junior Mary Marthens, will be an angel. Marthens got inspiration for her costume from Pinterest.

“It is basic and easy,” Morin said.

This idea of a ‘basic and easy’ costume is popular because it is versatile and can be styled with little to no effort.

According to Oprah Daily, “you can simply shop your closet and lean on makeup and a few store-bought accessories.”

There are multiple places to buy the costumes and accessories. Amazon, Party City, Target and Spirit Halloween are all places where sophomores Elle Jones, Bebe Kibler, Maddy Miller and Marthens will buy costumes.

Sophomore Lindy Smith claims that she believes vampires will be the most popular costume this year. Smith herself will transform into a fairy, an idea she and her friends got from TikTok.

Sophomore Lauren Scott also got her inspiration for her Charlie’s Angels costume through Tik Tok.

“I have learned a lot from Tik Tok, especially about fashion,” Scott said. “Tik Tok has created a lot of new styles that I have tried to keep up with.”

Social media has become a platform for the birth of new fashion trends and styles.

According to GM Fashion Career, “the fashion industry has been booming on the rising social media platform [tiktok].”

Although trends have shifted, inspiration for TV shows and movies has continued to be represented in costumes.

Jones is dressing in a group costume as The Dynamite Girls from Mamma Mia.

“Dressing up as one of your favorite TV or movie characters for Halloween is a low-lift way to pretend you’re someone else for a night.” Marie Claire Magazine stated.

Additionally, Marthens believes another popular costume idea this year will be from TV show Euphoria.

According to Insider, “If you want to know what the next big Halloween costume will be, just pay attention to pop culture and big stories that everyone is talking about.”