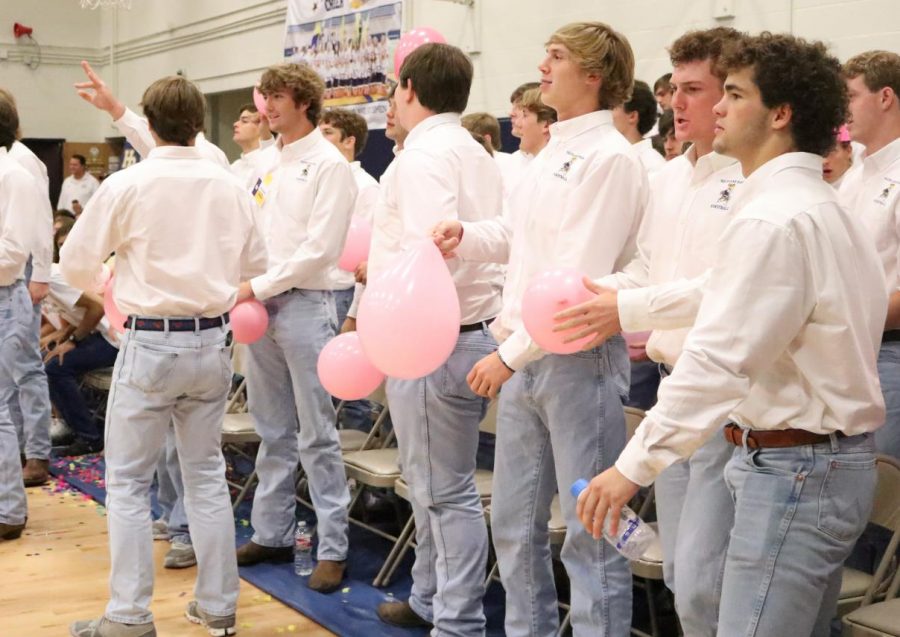 The varsity football team prepares for team time during a pep rally.

The Scots claimed a 52-31 victory against the Rockwall Yellowjackets on Friday, Sept. 17.

At the start of the second quarter, Scots’ quarterback, junior Brennan Storer, aimed to throw the football to running back, senior Ben Croasdale, but it was intercepted by Yellowjackets cornerback, senior Cadien Robinson. Robinson ran the ball from the 20-yard-line into the end zone, scoring a touchdown.

As the sky grew darker and the score continued to rise in favor of the Yellowjackets, it seemed as though the Scots’ were going to lose. But, wide receiver John Rutledge pulled through, scoring a touchdown for the Scots.

Rockwall then scored a field goal, bringing the score to 24-14, increasing the distance the Scots would have to cover during their comeback.

“We had a little slow start defensively, allowing them [Rockwall] to score fast at the beginning, but we adjusted and improved,” outside linebacker and senior captain George Wright said.

Halfway through the second quarter, defensive end senior captain Jack Curtis caught the ball at the 20-yard-line, resulting in a touchdown for the Scots. The score was now 24-21.

With 24 seconds left on the clock, senior wide receiver Luke Rossley, made what appeared to be a touchdown. This play was disputed and ultimately discarded by the referees.

Still facing a score of 24-21, the Scots made a last attempt to balance the game.

With one second left on the clock and 6 yards to run, the Scots called a timeout in order to strategize. They managed to score a field goal from about the 15-yard-line, successfully achieving a tie of 24-24 by the end of the second quarter.

The score was 38-31 by the end of the third quarter. From there, the Scots made two more touchdowns, ending the game with a score of 52-31, leaving the Scots victorious.

“I felt like we had the energy in the first half, but we didn’t have it in the second,” Rockwall defensive end sophomore Hayden Curry said.

This projection made the win more meaningful for cornerback, senior Blake Bevans.

“We had confidence in ourselves the whole time, going out there to prove everyone was wrong was a great experience,” Bevans said. “I think that was our best game of the season so far. It showed our potential and how much we’ve grown since week one.”