With Dak Prescott back in time for season opener, experts discuss team’s prospects 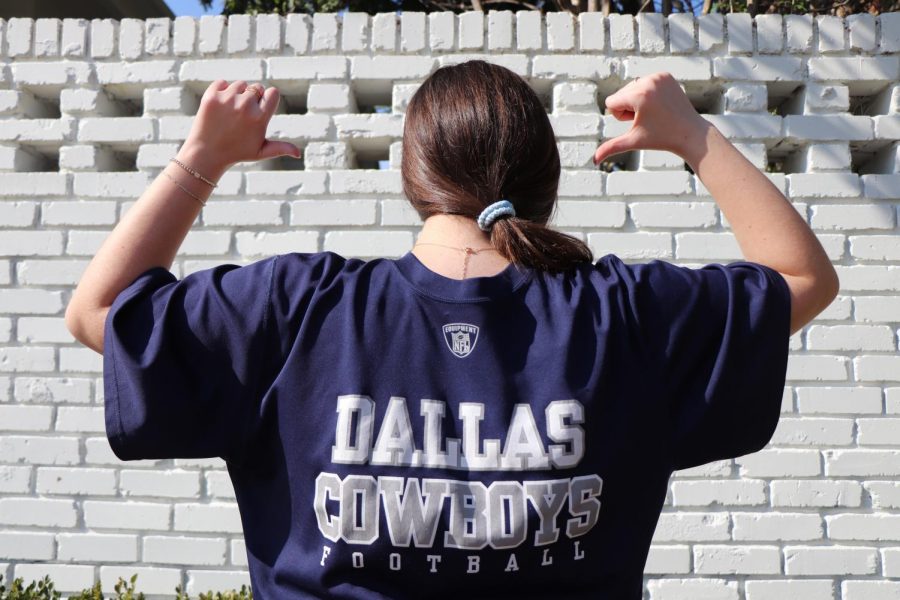 Sophomore Tia Taubenfeld points to her Cowboys’ jersey. Taubenfeld is excited for the Cowboys' first game of the season.

The Dallas Cowboys will play their first game against defending Super Bowl champions, the Tampa Bay Buccaneers, in Tampa, Florida on Thursday, Sept. 9.

The Cowboys will come into the 2021-2022 season with multiple players recovered from prior injuries.Quarterback Dak Prescott is planning to play his first game of the season after an ankle injury in Oct. 2020, followed by a shoulder strain in July.

“Oh, I’m back,” Prescott said in an episode of “Hard Knocks: The Dallas Cowboys,” a show focused on the lives of the players on HBO.

Offensive tackles Tyron Smith and La’el Collins, and tight end Blake Jarwin will also make their post-injury returns to the game alongside Prescott, according to CBS Sports reporter Patrik Walker.

Now having key players back in action, Prescott is expected to increase numbers like his yardage and pass completion rate. He is also supposed to have increased protection from returning team members.

Despite ​​the return of numerous healthy players, COVID-19 is still affecting the team. Offensive guard Zach Martin tested positive for the coronavirus on Sept. 4.

Cowboys Head Coach Mike McCarthy said during a press conference Martin will be out for the first game.

“He’s frustrated obviously…but hey, this is the world we live in right now,” McCarthy said.

However, after Prescott’s return, ESPN reporter Todd Archer expects running back Ezekiel Elliot to have more plays this year.

“If [the opponent’s] defenses zero in on Prescott’s arm and the Cowboys’ 3 star-wide receivers, Dallas can shift to using more of Elliot,” Archer said for ESPN’s National Football League coverage.

Elliot was noncommittal about what his team will look like in their first week.

Cowboys experts and fans are hoping for a Super Bowl title.

“Dak Prescott and company have the ability to be one of the most potent offensives in the league,” Bob Lilly Jr, son of famed Cowboys player Bob Lilly, and CEO of Bob Lilly Promotions, said.

“Our goal is to be the No. 1 offense,” Moore said in a preseason meeting, as reported by ESPN.