First four episodes of WandaVision live up to hype 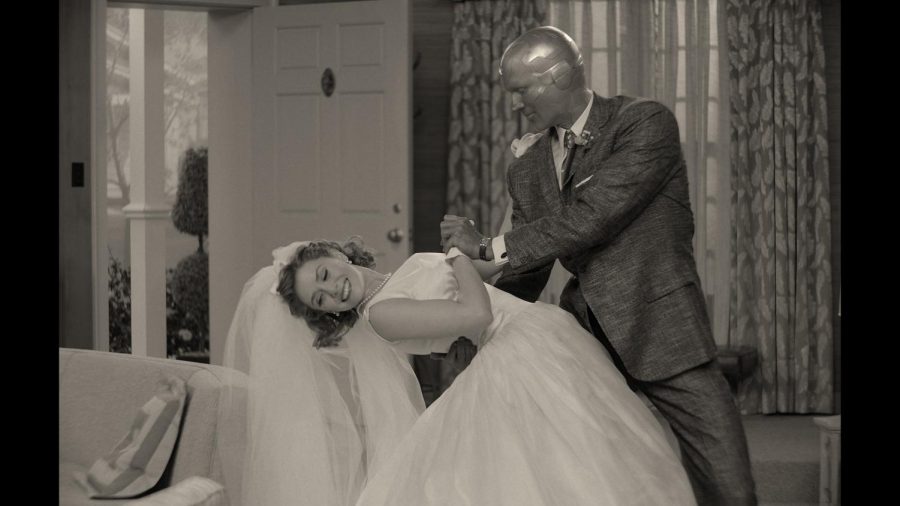 Disney's Marvel characters Wanda and Vision are seen in their new home. Disney+ released the last episode on March 5.

“WandaVision” is easily one of the most anticipated shows by Marvel fans – for good reason.

This was an extremely anticipated show when it was first announced in November of 2020 and the buzz around what this show will entail has skyrocketed. I was confused about the context of the show since Vision, played by Paul Bettany, died in “Infinity War” which was years before the show was announced. Now, he is somehow magically reincarnated to star alongside Wanda, played by Elizabeth Olsen.

“WandaVision,” currently streaming on Disney+, depicts the lives of Avengers Wanda Maximoff and Vision as they adjust to an idyllic life in the suburbs where not everything is as it seems.

Upon first viewing, it was easy to tell this wouldn’t be a normal Marvel storyline. The show is filmed much like the 1950s sitcom “I Love Lucy,” an American sitcom popular in the ’50s, with its laugh track and costume choices.

In the second episode, the style changes from ‘50s attire and dialogue to the ’60s. I thought there might have been a time jump. Maybe the show is now 10 years into the future, but I figured that couldn’t be the case because all of the characters remained the same age. As expected, the third episode now took place in the ’70s and in color instead of black and white. It seemed as if each episode were in a new decade since the fourth episode was now in the ’80s.

I found this to be an interesting choice because it proves this show isn’t going to be what it appears to be, a boring sitcom about the lives of two superheroes as they move into an average suburb and live their life as a normal married couple.

The filming was also extremely well done with most of it being shot in a wide frame, which was typical for shows in the 20th century. It highlights how the setting of the show is taking place in a different generation or at least what looks like a different generation. Most sitcoms don’t have a lot of drama in them, but whenever a scene is important for the storyline, the camera zooms in on the faces of the cast highlighting the unease and tension that rests from the unexpected event.

One thing I didn’t enjoy about “WandaVision” was how bad the acting was sometimes. Olsen is an amazing actress and shows off her talent in other Marvel movies she appears in like “Avengers: Age of Ultron” and “Captain America: Civil War.” This seemed to be a choice made by the director since it’s obvious these actors are better than they portray. I soon realized this was because sitcoms as a whole don’t have genuinely excellent acting and the writing is rarely impressive.

Disney is also known for dropping Easter eggs in their TV shows to illustrate how everything is connected. The first major callback is in episode one at roughly 10 minutes in, where there is an ad for a toaster. A commercial for a toaster is strange on its own until it is revealed the toaster is made by Stark Industries, a weapons manufacturer during “Captain America: The First Avenger,” and is also Tony Stark’s company, who is known as Iron Man. This was the perfect way to show how everything is linked together and how the show connects to the rest of the Marvel Cinematic Universe.

The mood of “WandaVision” completely switches during the second episode, something that was much needed. After the first episode, I was bored and confused, the plot seemed bland and uninteresting, but in true Marvel fashion, a couple of plot twists were thrown in to keep audiences interested and on their toes.

After only four episodes, I was completely hooked. My mind was racing with questions and theories about how the show was going to go. Most shows released on streaming services are only a couple of episodes long with episodes averaging around 50-60 minutes per episode, whereas “WandaVision’s” episodes are around 30 minutes. I was left wondering how long this series is going to be and whether or not a second season would follow. As of Feb. 8, there are only five episodes currently available for streaming and there will be nine episodes in the entire series.

“WandaVision” is an excellent continuation of the Marvel Cinematic Universe and deserves all the recognition and attention it gets.