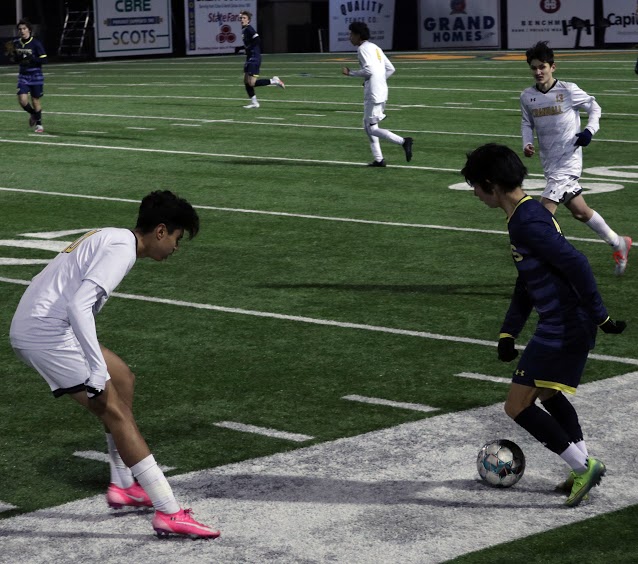 Freshman Elias Taft gains possession of the ball and figures out a strategy to get past Crandall junior Alex Ramirez. This game against Crandall took place on Feb. 9 at 7:15 p.m. and resulted in 4-1 victory.

The boys varsity soccer team won 4-1 against the Crandall Pirates on Feb. 9 in the Highlander Stadium at 7:15 p.m.

Head coach Salvador Richie said heading into this game, the team was hoping for a win in order to move towards the goal of securing a first-place spot in the district.

Within the first 8 minutes of the game, junior Kyle French scored the first goal. Not too long after, junior Jack Krejs scored the second goal, and junior Lucas Guevara’s third goal put the team ahead 3-0 at the first half.

Later on, senior Daniel Writer almost scored again, but the ball was caught by the Crandall goalkeeper. By the end of the first half, the score was 3-0 Scots.

Before the start of the second half, the goalkeepers switched from senior Clay Van Eaton to sophomore Kyle Barron.

A strategy used by both teams was to hit the ball out of bounds to try and sabotage the other team. But by the 20 minute mark of the second half, no points were scored.

Then, junior Jesus Rodriguez scored a goal for Crandall. Not too long after, however, senior Micheal Ngo scored the final goal of the game.

“This team has demonstrated lots of promise and has succeeded my expectations,” he said. “I want to give them lots of credit for being coachable and successful.”