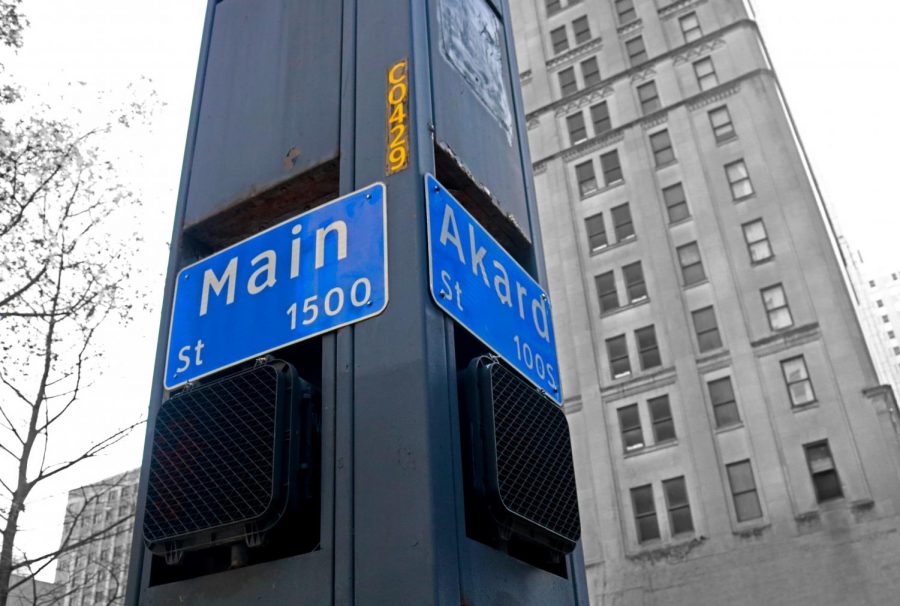 A street sign marks the intersection of Main and Akard Street in Downtown Dallas. In 1910, this was the location where an angry mob lynched a Black man named Allen Brooks on a structure called Elk's Arch, which was later torn down.

“White Texans aimed the brunt of their terror against the group of African-Americans best able to defend themselves and challenge the racial status quo.” – W. Marvin Dulaney, 1993, Whatever Happened to the Civil Rights Movement in Dallas, Texas?”

It happened on the corner of Main and Akard Street.

A 65-year-old Black man, beaten and stabbed, hung limp as the rope tightened around his neck.

A mob had seized him from the Dallas County courthouse where he faced trial for the alleged rape of a child, determined to dole out their own vision of justice. They sought other Black men accused of murder to lynch, but law enforcement had already hidden them away.

Commemorative lynching postcards circulated. Nobody in the crowd was indicted.

The murder of Allen Brooks in downtown Dallas February 1910 wasn’t unique. In 1910, four other Black men were lynched. Texas is the state with the third highest count of lynching victims after Mississippi and Georgia, and from 1885 to 1942, lynchings killed 339 Black victims in Texas, according to the Texas State Historical Association.

Dallas in particular was a hotbed for violent white supremacists. In the early 1900s, especially the 1920s, membership in the Ku Klux Klan was commonplace.

Out of every three men in Dallas eligible under the KKK’s membership requirements, one was a member. The Dallas chapter of the KKK, known as Klavern No. 66, had the largest membership in the U.S. per capita at the time with 13,000 members.

Local elected officials, law enforcement and business leaders were all Klansmen. The Texas State Fair had a “Klan Day” in 1923, during which a Klan initiation ceremony for 5,631 men took place, and more than four times that amount were in the crowd watching.

The Dallas KKK were also infamously violent, even by Klan standards. They had a designated “whipping meadow” at the bed of the Trinity River and flogged 86 people just in the spring of 1922. The Klan headquarters in Atlanta sent a representative to Dallas, concerned after the Dallas Klan kidnapped and mutilated a Black physician.

Though Klan membership declined in the World War II era, the associated terroristic behavior certainly did not go away. As Black families – displaced by development and slum conditions in designated black neighborhoods – approached white areas of South Dallas, residents of the area attempted to drive them out through fear.

In 1941, bombs detonated in 18 newly Black-owned homes. The police did not apprehend the people behind the bombings. The only solution the city offered was to help the Black people leave.

The same bombing problem came back in the early 1950s, again in South Dallas, and again by white people attempting to prevent the advancement of Black people into their neighborhoods. The events surrounding this series of bombings heavily feature in Jim Schutze’s “The Accommodation,” as an example of how Dallas leadership offered neat, diplomatic and, ultimately, toothless solutions to the plight of Dallas’ black population.

One incident in particular gained press attention, making front page news at the Dallas Times-Herald. A Black elevator operator and bellhop at the Adolphus hotel named Alex Johnson had allegedly slept with a white woman. In response, KKK members kidnapped him, whipped him and burned a KKK symbol into his forehead. They made Johnson return to the hotel lobby bloodied and shirtless in order to set an example.

A “blue-ribbon” grand jury convened to investigate the origins of the bombing campaign, composed of influential members of the Dallas Citizens Council, and influential leaders in the Black community, like ministers. But as they dug deeper into the case, they began to realize that important figures in South Dallas could be involved. In the end, only three people were indicted, and none were sentenced.

The Dallas Citizens Council was more effective in preventing violence later. They pleaded white Dallas to accept school desegregation peacefully, seven years after the 1954 Brown v. Board of Education decision forcing desegregation across the country.

They commissioned an advertising executive to produce a 20 minute film called “Dallas at the Crossroads.”

The film, narrated by Walter Cronkite, appealed to white Dallasites’ senses of humanity and of law and order, telling them they should dispute desegregation laws through legal means, not through violence.

It used footage from other cities of angry white mobs, who frightened the children with their hate. Not one black person featured in the film.

At the end of the film, it promised social and legal consequences in Dallas for those who stepped out of line. The police chief made an appearance to assure viewers that he was ready to enforce the law.

In a city that let violence against Black people go unpunished countless times, this was a bold threat.

Black Dallasites still suffered from violence at the hands of the police, peaking in the 1980s when the Dallas Times-Herald reported Dallas had the number one rate of police brutality in the nation per capita.

However, the organized efforts to terrorize Black people who dare to step out of line have ended, though they have not been forgotten. The Dallas County Equal Justice Initiative Coalition formed in 2020 to advance formal recognition of the lynchings in Dallas County, including the 1910 lynching of Allen Brooks.

“You have to put in an application to show that you are willing to meet the criteria that they set forth, which is quite extensive,” Keaton said. “They want all of them to have dialogues [and] hard conversations [on] race relations issues.”

Keaton has experience with these kinds of projects. For the past six years, he’s been running Remembering Black Dallas, an organization promoting and educating on Black history and culture in Dallas. He’s also advocated for the city to put up lynching memorials even before the Dallas County Equal Justice Initiative Coalition formed.

One way the coalition plans to carry out its mission is its events about the Brooks lynching. It has a panel discussion and workshop scheduled for Feb. 27 and an event for the dedication of the memorial scheduled for March 3.

Keaton has several reasons why he believes so much that it’s important to raise awareness for Black history.

“I think it makes a great impression that someone who comes through all these types of adversities, that they are able to persevere,” Keaton said. “It gives a sense of pride as to where we’ve come from and how far we’ve come. It also gives you almost a playbook as to where to go from your particular situation.”