Sophomore Can’t Be Stopped By Surgery 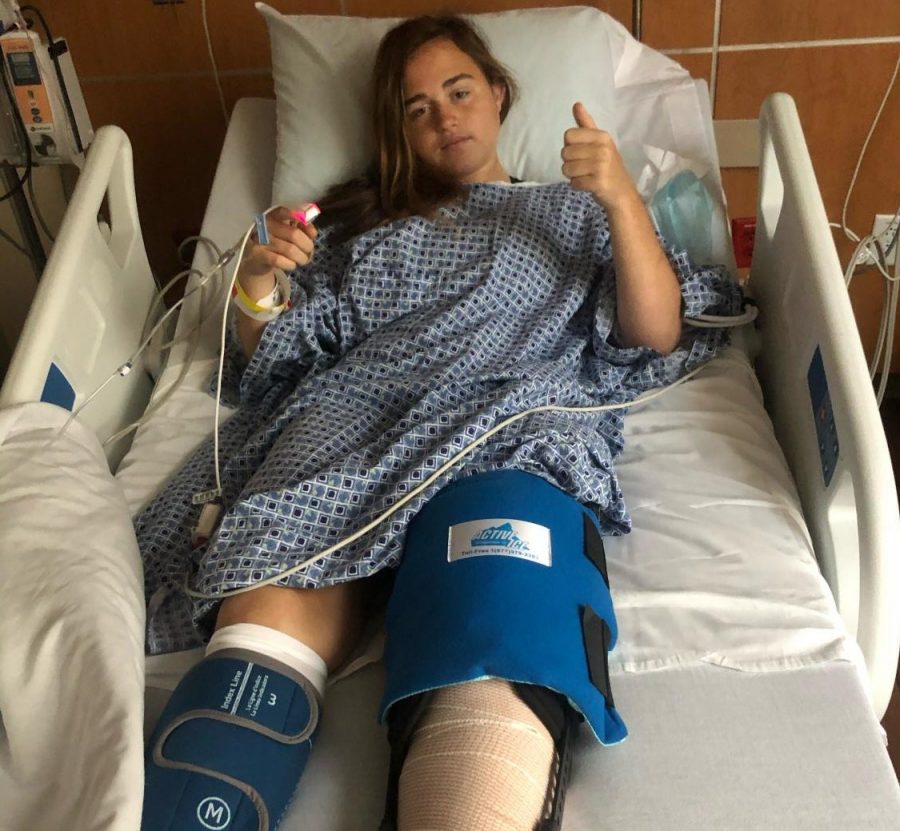 Sophomore Ella Weathersby recovers in her hospital bed. The soccer player has torn her ACL twice.

Sophomore Ella Weathersby’s plans for D1 college soccer seemed to disappear when she tore her ACL for the second time.

The beginning of a new school year meant soccer tryouts were getting started. On Oct. 15, after a week of breakout performances, Weathersby tore her ACL.

“I felt so good this season,” Weathersby said. “I was killing it. I was doing good in the club, starting and playing well, scoring, assisting. Right before varsity gets announced it happened just like that.”

A torn ACL is a common injury among athletes, including those still in high school. An ACL or Anterior Cruciate Ligament is one of the four major ligaments of the knee. It stabilizes rotational movements at the knee and protects the knee from hyperextension.

An ACL tear is usually caused by twisting the injury while the knee is slightly bent. This can be non-contact or from a blow to the outside knee. It is most common in soccer, football, skiing, basketball and football.

Reconstruction surgery is needed to fix an ACL tear. It is a safe procedure that involves harvesting a graft from your tissue to replace the ACL. Most commonly, a part of the quad tendon is used or a graft from a donor. The tendon graft is fit into place to replace the old ACL.

Weathersby is no stranger to ACL injuries. In March 2019, after she was selected to play in a tryout for a Texas Christian University soccer camp as an eighth-grade student, she found herself in a rather grim situation during warm-up.

“I took a step, and my knee cracked,” Weathersby said. “I had never felt anything like that. I got up, and I thought ‘wow this is weird,’ so I went to the trainer, and she told me I was good to go. But when I started the game, the second I cut, I came down. The trainer iced me up and told me that it wouldn’t happen again, so I went back into the game, and I cut and went down”

Not only had Weathersby torn her right ACL, she also tore her meniscus in four different spots.

In August, she started playing in games again, becoming the top scorer of her team freshman year. Her soccer season was filled with the victories Weatherby had long-awaited since her first ACL injury.

During one of the tryout days, while Weatherby was jogging on the field, she heard a pop in her leg. It did not draw alarm because Weathersby experienced no pain.

“Last time this happened I thought ‘this isn’t good, you should have this looked at,’” she said. “The coaches were like ‘you know if you tore your ACL,’ and I told them that I know,” Weatherby said.

However, her knee started to swell so badly it required an MRI. Weathersby and her family anxiously waited for the results.

“I was shattered,” she said. “It was really hard to hear.”

She had torn her left ACL. This tear was a bit different than her right knee tear. This time Weathersby was prepared with knowledge of her injury.

After surgery, Weathersby knew that her leg would go through muscular atrophy, which is where you lose muscle mass due to inactivity. Though the first day after surgery was tough as the anesthesia wore off and the pain began to set in, she was not alone during these difficult times.

“We’ve learned to remain positive, trust the process and be patient,” Mrs. Weathersby said. “An ACL rupture is one of the most dreaded sports injuries for young athletes due to the recovery time, usually nine months. We’ve seen firsthand that with lots of hard work and determination, an athlete can come back physically stronger and with a mental resiliency that spills over into all areas of their life.”

Coming out of what was now her second knee surgery, Weathersby’s parents noticed she was much more confident because she knew what to expect. This time, she had the mindset that was needed to push through the pain that lay ahead.

“I feel like I’m doing better this time than last time,” she said. “The last time I channeled my emotions in and kept it inside.”

On Nov. 2, the account, @acljourney74, was created. Weathersby uses her account as a way to share her little victories throughout her road to recovery. This includes getting her stitches out, getting off crutches and even bending her knee five degrees during a physical therapy session.

The account has not always been an enticing idea for Weathersby. During her first ACL surgery, the idea of having a social media platform seemed daunting, and she worried about getting negative feedback from her classmates.

After her second surgery, the idea was still developing in the back of Weathersby’s mind and eventually was put into action. Her best friend and fellow ACL recovery patient, Sam Courtwright, gave Weathersby the push she had been looking for.

“She’s told me from day one that she thinks I can do something,” Weathersby said. “She thinks I help girls. She recently pushed me to do this and so did my mom.”

She hopes to provide information for anyone that has gone through an ACL tear. Taking on this “big-sister role,” Weathersby has already gotten positive feedback from her friends and followers. During the first couple of days after starting the platform, Weathersby received several messages from girls who were going through the same thing as her.

“Girls will reach out and tell me that they have torn their ACL and ask me for advice and workouts to do,” she said. “Obviously, I can’t tell them because I’m not a doctor but we’ll talk about rehab, our mental state, we catch up with each other and it’s really fun.”

She also plans on debuting a podcast-style show in the future, in which she and her fellow teammates and classmates discuss their ACL experiences. The platform has provided Weathersby with opportunities to focus on the small wins.

Despite facing major setbacks, Weathersby has kept her head up high and maintained a positive attitude. She hopes that sharing her experiences can help others to feel less alone and more optimistic about their own.