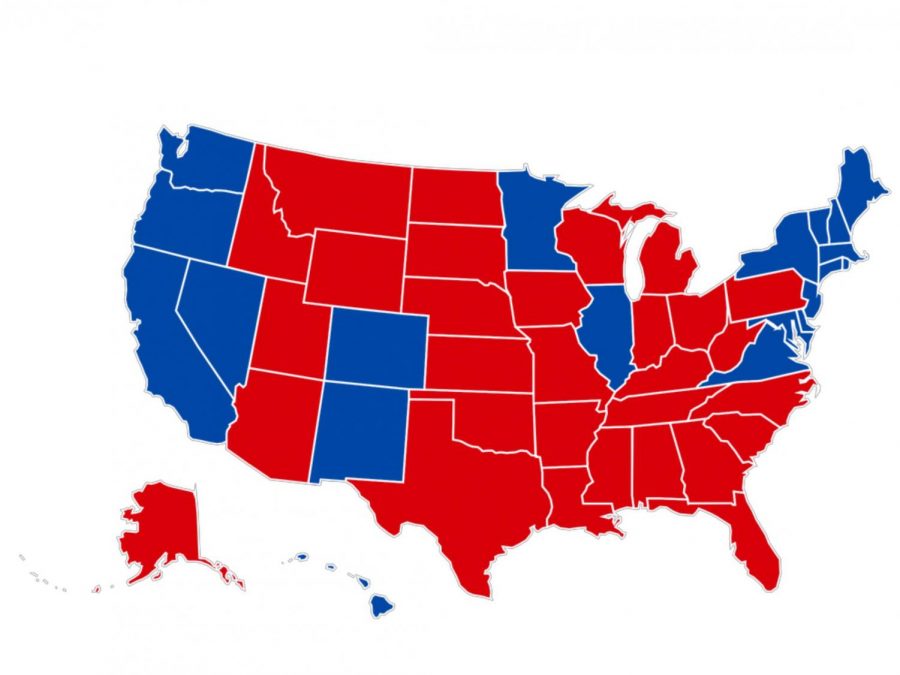 This map above depicts how each state’s electorate voted in 2016. Red represents a win for President Donald Trump, and blue represents his running mate Former Secretary of State Hillary Clinton.

While the electoral college has its benefits, there are many issues that cause it to divide the country.

The electoral college is a system implemented to help the American people vote for a president every four years, with the goal to have representation across the entire country by having people vote for electors, who then vote for the president.

The electoral college was intended as a safety net system, so the final vote would not be in the hands of the less informed or uneducated. The electors, however, are more likely to have the information and facts necessary to make whichever decision is best for their party. The founding fathers built this system as a way to balance out the will of the majority voice.

This point may have been relevant in 1779, but modern technological advancements now allow the “common man” to have the information necessary to make an educated decision. Although Alexander Hamilton in 1788 saw the electors as being “free from any sinister bias,” members of the electoral college are now selected by the political parties, and they are expected to vote along party lines regardless of their own opinions about the candidates.

The electoral college ignores the will of the people. There are over 300 million people in the United States, but just 538 people decide who will be president. In 2016, Hillary Clinton won the popular vote by more than one million votes, yet still lost the election on electoral votes.

Just as in 2000 when George W. Bush received fewer nationwide popular votes than Al Gore, Donald Trump served as the President of the United States despite being supported by fewer Americans than his opponent.

Nonetheless, a solid benefit to the current system is that it ensures that all parts of the country are involved in choosing the President.

However, the electoral college gives too much power to “swing states,” resulting in the presidential election being decided by a handful of states. The two main political parties can count on winning the electoral votes in certain states, such as California for the Democratic Party and Indiana for the Republican Party, without worrying about the actual popular vote totals. This is exactly what Trump did in 2016 and won, despite not winning the overall popular vote.

Because of this oversight, presidential candidates only need to pay attention to certain states that can swing one way or the other. A Nov. 6, 2016 episode of PBS NewsHour revealed  Donald Trump and Hillary Clinton made more than 90 percent of their campaign stops in just 11 so-called battleground states. Of those visits, nearly two-thirds took place in the four battlegrounds with the most electoral votes — Florida, Pennsylvania, Ohio and North Carolina.

The entire world has changed and made advancements in the last 50 years that has rendered this system of voting outdated. The electoral college used to be the ideal system of determining the leaders of this country, but as time and society progresses, the law must follow suit and adhere to changes.

Despite the drawbacks people may bring up about the electoral college, it’s still important to the U.S. election.

The electoral college is necessary for electing a president. It allows even and thoughtful representation across all 50 states.

Individuals are represented through the electors picked by the political parties in each state. These electors can be state party leaders, state elected officials or political affiliation with their party’s presidential candidate.

There is a perception the electoral college and the electors completely ignore the majority votes of their electorate. Seven electors did this in the 2016 election. However, this practice, called faithless voting, has never affected the outcome of the an election.

In fact, the electors from 33 of the states are required to take a pledge to vote for whoever their state’s majority, and 16 of those states have laws in place to have their vote thrown out, fined or serve jail time if they don’t follow their promise. This was constitutionally upheld by the Supreme Court Chiafalo v. Washington on July 6.

A common argument against the electoral college is the use of a winner-take-all system. The system dictates that whichever candidate the majority of the electors must vote for, automatically wins all the electoral votes of the state. This is active in 48 states, and it can lead to a large number of people not being represented. This is partially to blame for why some presidents lose the popular vote but win the election.

There have been five presidents who did not win the popular vote but won the electoral vote. This happened to Presidents John Quincy Adams, Rutherford B. Hayes, Benjamin Harrison, George W. Bush and Donald Trump.

Despite the flaws in the winner take all system, it’s still better than abolishing the electoral college. This is because this system is still better than placing the election in the hands of the politically naive. The founding fathers gave the public little credit for keeping up with political news and awareness when it came to the presidential election. Yes, the people today have more potential access to news and information, but do you want people who primarily get their news from social media outlets like TikTok and Instagram to have your fate in their hands?

Also, the whole reason behind the decision to go with the electoral college was to ensure people in less populous states, such as those in the modern day midwest, still had equal representation when compared to larger states like Texas and California. It prevents the most populated states from deciding the election alone.

Lastly, the difficulty with removing the electoral college would be the government would need to pass an amendment to change this system. The amendment would have to pass in two-thirds of the House of Representatives, two-thirds of the Senate and three-fourths of the states. The odds of that many states giving up a voice in the elections is unlikely.

There is simply no need for the removal of the electoral college. It is a very effective system to elect the president, and it should not change.