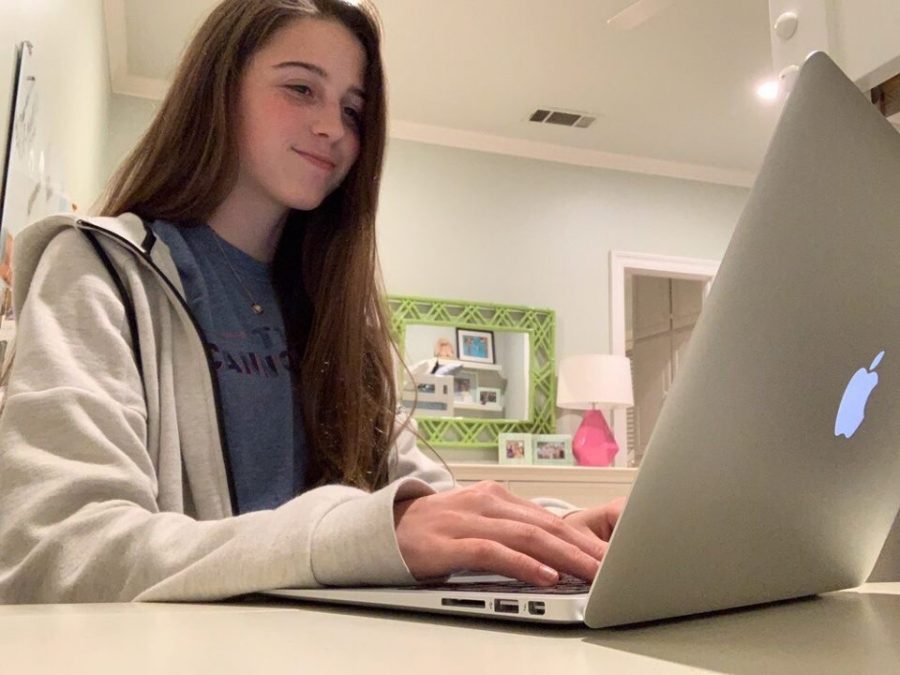 Freshman Ellie Holmes works on her online assignments at home. Due to the global pandemic, schools have closed their doors to prevent the spread of coronavirus. Despite school being shut down, teachers have offered educational opportunities for students so they don't fall behind in their classes.

In just a small amount of time, the new strain of coronavirus, caused a full-fledged pandemic, forcing millions of schools across the nation to move classes online indefinitely.

Texas Gov. Greg Abbott closed schools for the remainder of the year on April 17, leaving Texas teachers and families to continue virtual learning from home.

Not only has this become an added stress to teachers, but students and their families as well, as they learn to adjust to a new normal. As a student myself, I think I speak for most when I say that adapting to the new learning system has not been the easiest.

No longer are we able to ask our teachers simple questions as quickly as before or take tests and quizzes on paper like we used to do. Now we rely on emails, Google Classroom and weekly video updates from our teachers. It has forced many of us to realize that we’ve taken classroom learning for granted.

While waking up as early as 6 a.m. to go to school every day isn’t always the easiest, it sure beats sitting in front of a computer working on assignments that you’re not sure if you’re completing correctly. Even though technology has allowed students to still keep in touch with teachers, it’s not the same as talking to them in person.

When I was at school, I never really thought about all the benefits that came with in-classroom learning. I knew that I wouldn’t want to be homeschooled, but the idea of why never occurred to me. Now I know the answer.

When we’re at school there’s so much human interaction, but where we are home, it can feel isolating to sit behind a device for hours without ever having a class discussion. In a 2015 study by Julianne Holt-Lunstad, a research psychologist at Brigham Young University, it was determined that social isolation increases the risk of mortality by 29 percent.

I’m not saying that online learning is going to kill us, but it shows that staring at a screen for hours at a time isn’t good for our mental health.

Working from home also means we are becoming even more reliant on technology. While computers and iPads are fairly dependable, technology is far from perfect. Even though we can be plagued by poor internet connection and have Wi-Fi issues at school and at home, the difference is that at school we have physical worksheets and a teacher to fall back on. Technology doesn’t have this benefit, because you’re essentially by yourself except for certain “office hours.”

Additionally, internet privacy is not an issue in real classrooms. Having to use a device for school work all the time means that there is now the threat of being hacked or having to deal with a security breach.

In recent weeks, Zoom, the video conferencing platform, has greatly increased in common use. The New York Times reports that approximately 200 million people now use Zoom. A few months ago, that number was significantly smaller at just 10 million.

With so many people around the world using the app at so many different times, it has led to a string of security problems. Users have complained about being hacked by internet trolls who broadcast inappropriate content during video conferencing.

According to Forbes, hackers are finding hundreds of thousands of old accounts and selling them. This is a big deal, because it can expose someone’s email, phone number and even address.

For many students, myself included, the current situation has been an eye-opener. It’s made me realize school isn’t as bad as I’ve made it seem to be in the past and given the option, I would definitely choose to be back in the classroom than working from a computer. Whenever classes resume, I hope we can all see learning from a new perspective.