Despite initial controversy, teachers believe the task force has potential 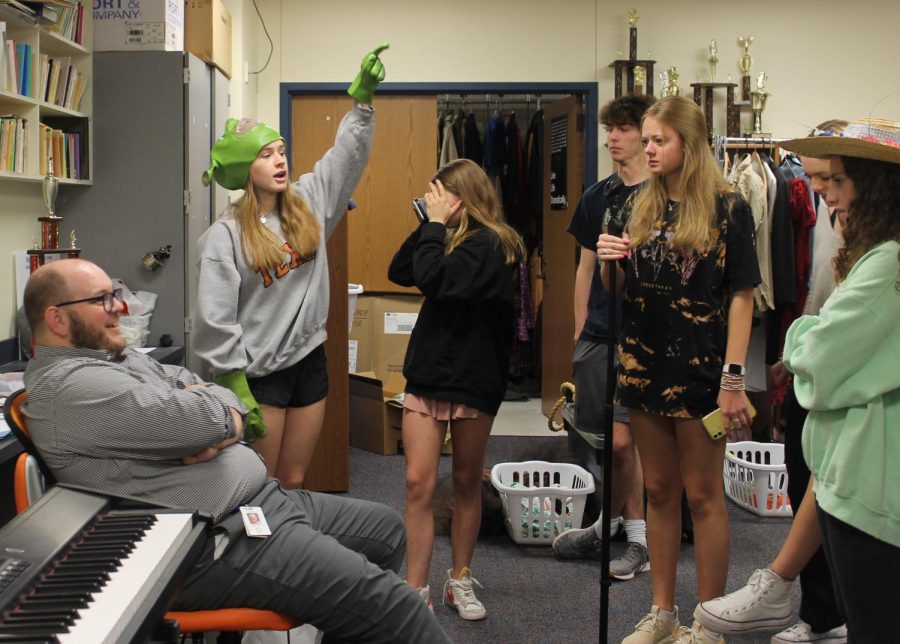 In preparation for an upcoming production, theater teacher Tyler Perring strategizes with Theater 2 students sophomores Nola Carroll, Mckinley Meece, Tucker Mattison, Clara Schwartzendruber, Nelle Blaylock and Laci Rosen, who sport various props from the closet. Perring initially had low hopes for the task force because it included only two teachers, but after the addition of more teachers he’s open to changing his mind. “If they actually listen to the teachers on the task force, it can have a great effect,” Perring said. “But if history says anything I don't imagine it will affect much.”

As an educator and parent, she was eager to help address the issue of the growing number of teacher vacancies.

“I have always had the greatest appreciation for the teachers who taught my own children here,” Streepey said. “As a community member, I just am so thankful for our teachers and recognize what an incredibly difficult job it is.”

On March 10, the Texas Education Agency announced the creation of the task force in order to target the recent problems of preventing staff from leaving and hiring staff that are faced in Texas’s many public schools.

In a survey by the Texas American Federation of Teachers, 66% of Texas teachers have contemplated leaving their jobs. Fox 26 News reported in July 2021 that there were over 700 teacher vacancies in Houston Independent School District, the largest school district in Texas.

“I have two roommates because I can’t afford to live in a place by myself,” he said.

Overworking teachers was another problem Perring thought led to vacancies.

“We’re rising to the occasion, but people are getting burnt out quicker because we’re being asked to do things [that] we’re not getting recognition or support for,” he said.

“There seems to be an injection of politics into education that many of us have not experienced in a long time, if ever,” Nuss said. “In addition to that, [it’s] similar to what we’ve seen nationally with a lot of people changing jobs and pursuing new work.”

As the school’s principal, Jeremy Gilbert is tasked with filling vacancies.

“The fact that the state is looking to put together a task force to help solve what I think is the biggest challenge that we have right now in education is amazing,” Gilbert said. “This is an acknowledgement by our state that we have a crisis.”

In the beginning of the planning process, there was controversy surrounding the composition of the task force. Originally, the task force was 28 members from several different school districts. It consisted of two directors of talent, 17 superintendents including one assistant superintendent, six human resources officers, but only two teachers: Streepey and Melina Recio, a teacher at McAllen Independent School District.

In response to public backlash, the Texas Education Agency issued a statement that 24 new teachers would be added to the task force five days after the announcement of the task force.

“Adding more teachers definitely speaks to their awareness of the issue,” he said.

Streepey believes that the success of the task force relies on listening to teachers.

“I think teachers at different stages have different needs, and I’m glad that people are listening and weighing in on this topic, because we need everybody’s input,” Streepey said.

One of the task force members, Shepherd Independent School District superintendent Jason Hewitt, has put out a survey to teachers that already has 20,000 responses according to Streepey.

Since the first meeting, no other meeting has occurred. The group will meet bimonthly and Streepey is hopeful for the future of the task force.

“Teachers are the single most important factor impacting student outcomes,” Streepey said. “It’s our job to do everything we can to support them.”