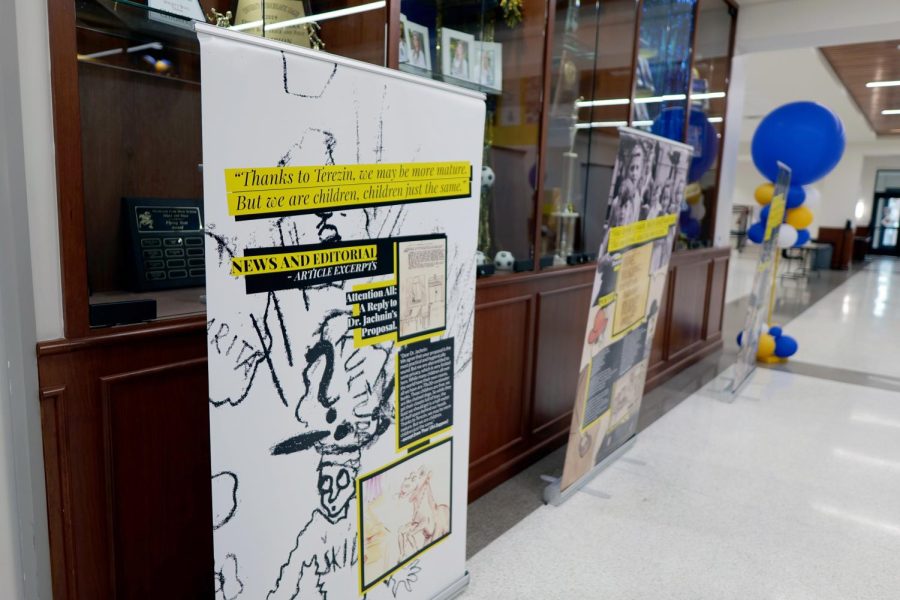 At the student entrance, a Holocaust Remembrance Week exhibit is displayed to encourage students to reflect on its history. The exhibit focused on a magazine created by a group of schoolboys during the Holocaust. "It is a good exhibit to have, especially because there is a lot of opportunity for it to be seen,” junior Dalton Buford said.

The Cinephile club displayed an exhibit near the student entrance in honor of Holocaust Remembrance Week from Jan. 24 through Jan. 28.

“I am really proud of the Cinephile Club, proud of the administrators and the school [for] coming together [and how they were] very supportive of bringing this exhibition,” said executive and creator of the exhibit Rina Taraseiskey. “We were really excited when it was there because we were able to show a different side of what people think of as the Holocaust.”

The exhibit tells the story of a group of schoolboys living in the rural Terezin Ghetto who were not allowed to go to school due to the Holocaust. In protest, they created a newspaper and wrote stories.

“This story is about them, and this magazine is about them fighting censorship,” Taraseiskey said. “The students of the Cinephile club felt like we don’t believe in censorship either, and we want to showcase to the HP kids that you can fight against censorship and for the right for your freedom of speech and expression, which are your rights of the constitution.”

“It is an interesting story about a group of children about our age,” Buford said. “I was glad to help out with something because it is a good cause, and I was ready to help with it,” Buford said.

Taraseiskey contacted multiple museums for the exhibit and contacted the surviving contributors of the magazine.

“I had a writer who wrote all the information and put stuff together and had a graphic designer in California design the exhibit because we wanted to celebrate the magazine and how neat the magazine was,” Taraseiskey said.

The main message captured by this exhibit is to not be a bystander during tragic events. Parent Vicky Glikin hopes it will educate students about what it was like to be a teenager during that time.

“We can never appreciate the life that we lost during the Holocaust,” she said. “[I hope it also helps] the students feel empathy towards people who would have had to face those challenges in their lifetime and hopefully inspire our young people today that there are still evils in the world, and they can also do something about it,” Glikin said.