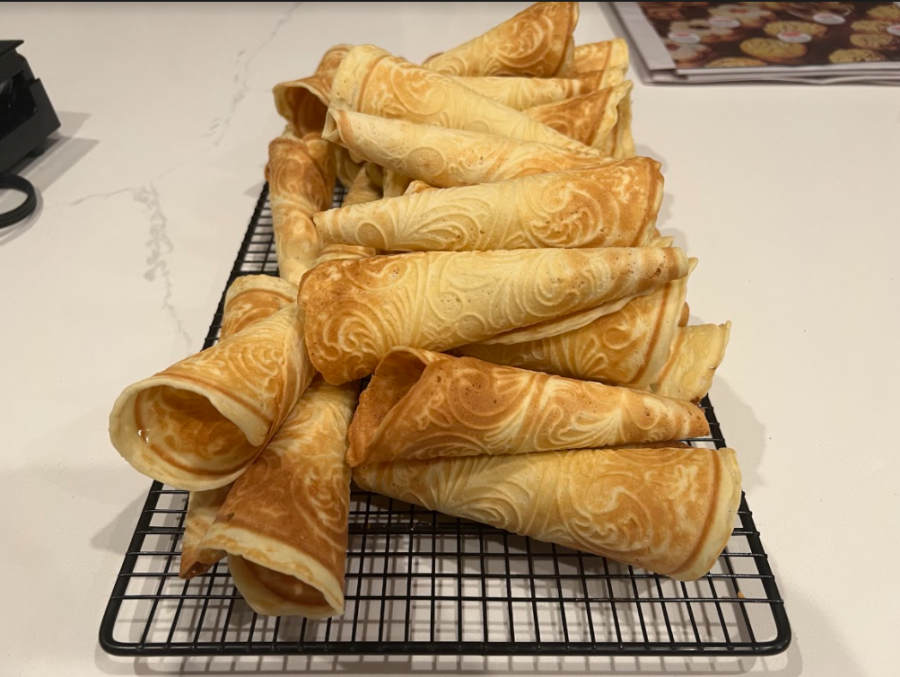 Freshly baked Krumkake cools, waiting to be filled. The cookies, which resemble waffle cones, have a rich history in Norwegian holiday festivities.

The time is the early 1900s. The 20th century has just begun, and wood stoves are increasing in popularity in Norway. It is Christmastime in the small town of Singsaas, and inside of the yellow painted two story farmhouse where the Tilleraases reside, a Christmas meal is ready. This includes a popular dessert, krumkake.

Krumkake, pronounced Crumb-kak-uh, is a type of Norwegian cookie with the shape, and to a lesser extent, the taste, of a waffle cone.

The dough is made from eggs, flour, sugar, butter, and heavy cream. It is baked into a round, thin, cake. Then, the baker must act fast to shape the just baked cake into a cone before the cake cools and hardens.

When the krumkake are made and shaped into cones, they are often filled, usually with whipped cream, but sweet fillings like custard and fruit like strawberries can be used as well.

The krumkake does not only carry tastiness and sweet fillings. The Krumkake carries a story of a man named Ole Tilleraas who left his family, moving from the small family farm in Singsaas across the world to America in search of a better life.

In 1892, Ole left Norway, boarding a ship on the Domino Passenger Ship Line and going to Quebec, Canada. From there, he went to northeastern Iowa, settling near the city of Decorah. The area had already been settled by a large number of Norwegian immigrants.

When Ole arrived in America, he changed his name from Tilleraas to Tilleros, an attempt to Americanize the name. Nobody is sure of how Ole traveled the great distance from Quebec to Iowa, but it is assumed that he either took a train or traveled along the Saint Lawrence river. Either way, he had gone through a great ordeal to reach Iowa.

His efforts proved to be fruitful.

In 1907, Ole purchased his first farm, just a few years after he first settled. There, Ole raised Herford beef cattle until 1926, where he diversified by building a dairy farm and raising Guernsey dairy cows. On the farm, Ole also raised pigs, sheep, and chickens.

Around this time, Ole married a woman named Emma Ellingson, after she immigrated to America. They had been sending each other love letters while Ellingson was still in Norway, but now they had been reunited. Life on the farm was good.

At this point, the Tilleros Farm had been in operation for over one hundred years. My grandfather and great-aunt had received a certificate from the state of Iowa thanking them for their service to Iowa’s agriculture.

But when ownership transferred to my grandfather and great-aunt, they decided that they couldn’t keep the farm in operation. Both had grown old, and were now living in Southern Wisconsin where my grandfather was raising my mom and my aunt. It simply became an impossibility to keep the farm running.

Now, the farm is empty for most of the year. The farmhouse, the big red barn, and the chicken coop are still standing today. A windmill resides next to the newly built garage. Hundreds of acres of unused farmland stretch for miles.

My family and I often visit the farm during the summer, usually driving up from my grandparents house in Wisconsin. My grandfather will drive my cousins and I around the farm on the Ranger, and just now, we’re learning to drive it ourselves. We play board games in the farmhouse, play cornhole in the yard and roast marshmallows over the fire in the evenings.

Krumkake is not only a tasty and delicious dessert, but also a symbol of culture, family and tradition, ever since the fateful day in 1892 when Ole left Norway for a new life in America.

First, you need to have a krumkake iron. We use a Krumkake Express 1839 by ChefsChoice.

Heat krumkake iron on medium high heat, put a teaspoon of batter on the iron, bake for around a minute then turn over and bake till light brown.

Remove from iron and quickly roll the flat cake into a cone shape, before it cools completely and hardens too much to be molded.