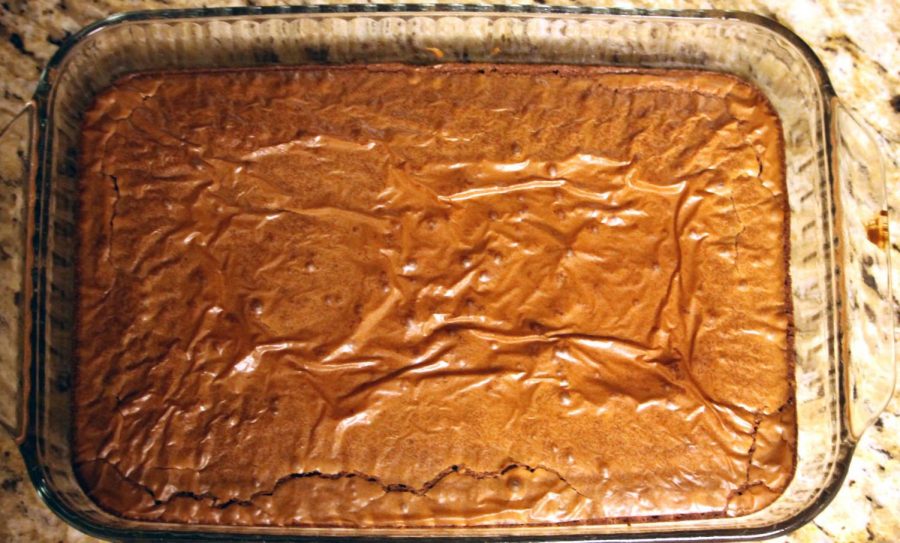 The cinnamon brownies when cooked to a golden color. The addition of cinnamon is what separates these from the usual chocolate brownies.

Holidays are a time to spend with family and friends, but they’re also a time to cook family recipes as well.

A recipe that’s been in my family for generations is cinnamon brownies from scratch. The  person who created this simple recipe was my great grandmother Jimmy Clark.

She always believed that anything made from a box with mix-in ingredients was way too easy and that they didn’t have love baked into them, something my great grandmother wanted to include in everything she made.

For that reason she made these brownies from scratch every year during the Christmas season. Back in 1982, when my great grandmother was a young woman, she was hosting her very first Christmas Eve party.

She had no idea what dish to make, so she settled for a simple and easy recipe she made up.

She’s made brownies many times before, but basic brownies weren’t what she wanted, especially for Christmas.

While she was baking she experimented with different kinds of ingredients such as, nutmeg, sweet paprika and mint, but she ultimately settled for cinnamon.

The cinnamon captured the holiday season and blended beautifully with the chocolaty brownies.

Since this recipe is very simple to make, she made these brownies every single year for Christmas Eve from when she was a young woman all the way up until she was an elderly woman.

This recipe is easy to duplicate and is also relatively easy to serve. It’s also a good holiday food to take to parties since it’s easy to share with others.

The taste of these brownies is sweet with a hint of bitterness from the semi-sweet chocolate inside of them and the taste sticks to your tongue and leaves you with a long-lasting flavor. They have almost a nostalgic taste to them that makes you feel at home.

The presentation is rather mundane, but my great-grandmother’s presentation wasn’t meant to be astute. What mattered most to her was the flavor.

The brownies are also best when warm and served with chilled vanilla ice cream. Together, all the flavors melt in your mouth. With every bite of these brownies you’re left with wanting more, so much so, you basically end up eating the whole tray if you’re not careful.

Overall, these brownies are embedded into my family’s history for and will be made for generations to come.

While my great grandmother passed away, her memory will never be forgotten. I passed along the tradition of making her brownies every year for my family’s Christmas Eve party. Every time I make them, I think of her.

Chop chocolate and put into pan with butter, melt together (set aside)

Add one egg at a time to the sugar-butter mixture, mix together until combined

Once combined pour into greased pan

Bake 25-30 minutes or until batter is fully cooked