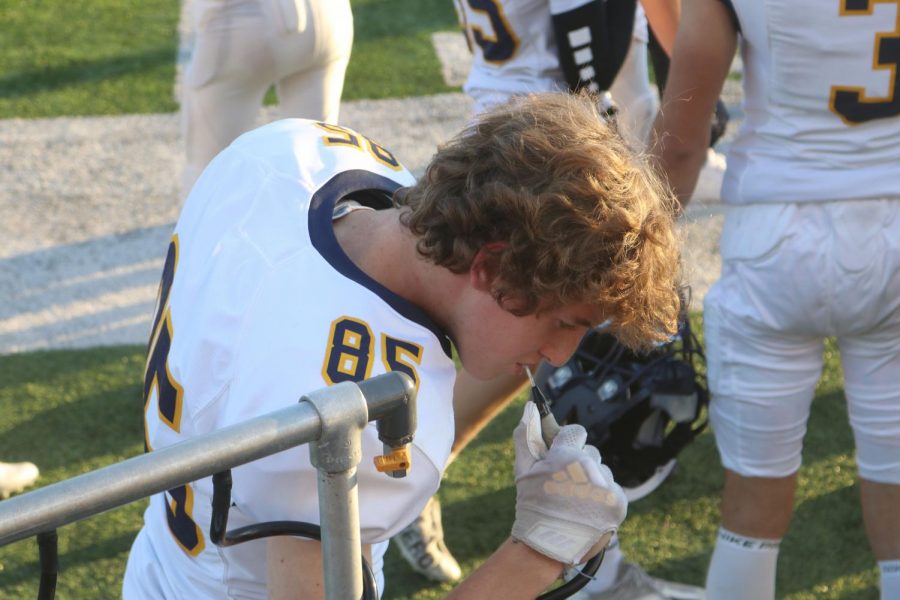 Under his coach's orders, Freshman Gold team wide receiver and defensive back Harrison Wheeler stops for a drink of water during a break. Wheel scored a touchdown that brought the team to 21 points. "It was a good play by our coach and I feel like helped my team," Wheeler said.

The Freshman Gold football team claimed a 48-0 victory over the Wylie East Raiders in its final game of the 2021-2022 season.

Running back Jackson Whitaker felt confident about the game.

“They’re a good team on film, but we always find a way to win,” Whitaker said.

The signs of a victory were not apparent at first. Both teams were locked in a scoreless, zero point tie for most of the first quarter. The moods were down in the stands as Anderson Jackson, the starting quarterback, was sacked.

“There’s history with Wylie East in our program,” coach William Corbett said. “Wylie East actually handed us a district loss not too long ago. I believe this was in 2016, so there’s some history there.”

The team managed to turn the game around. After Jackson was sacked on the second down, the quarterback threw a touchdown pass to defensive back Blake Beeson, who caught the ball in the endzone during third down, making the score 0-6. The extra point kick was no good.

The feeling was optimistic among the home audience as the first quarter ended.

The second quarter began with Beeson giving the team first and goal before a Wylie East defensive end tackled him. A cheer went up throughout the stands once more as the team scored another touchdown, bringing the score to 0-12. A successful two point conversion made the score 0-14.

Wylie East were handed the ball and were held in place by the team’s defensive line. Running the ball to the endzone, Beeson collided with a Wylie East defensive man.

After a first down, the Scots continued their successful drive. On third down, Jackson threw a completion to wide receiver Harrison Wheeler. Wheeler ran the ball to the endzone, scoring a third touchdown for the team. With a qualifying extra point, the score became 0-21.

Going into the third quarter, the team started off strong with a complete pass to Anderson Curtis, who gave the team first and goal. Within no time, the Scots scored again, with a running touchdown by Beeson. With the extra point kick good, the score became 0-28.

“28-0 was a pretty solid lead for the third quarter,” wide receiver Ashton Pham-Davis said. “I could see that we were going to win.”

After no yard gain by Wylie East, the ball went back to the team. A touchdown by Whitaker brought the score up to 0-35, along with the extra point.

The ball returned to Wylie East, who carried the ball to the 26-yard line.

During third down, offensive lineman Will Lewis intercepted a pass by Wylie East and ran the ball all the way to the endzone. Without the extra point, the score was brought to a solid 0-41.

Moods in the stands were at an all time high. The team had a 41 point lead that led into the fourth quarter.

“We went into the game with a goal of takeaways every single drive,” Corbett said. “And we accomplished this really, really, hard thing to do on any level.”

The fourth quarter kicked off with Wylie East losing the ball after no yardage gained. The team received the ball once more, starting off with a complete pass by Jackson to wide receiver Brandon Lilly, getting to second down with six yards to go.

During third down, Jackson threw a touchdown pass to wide receiver Bryan Copeland. With the extra point good, the score became 0-48.

The visitor’s side was desolate as most people had left after halftime. The few people remaining watched grimly as the scoreboard fell further and further out of Wylie East’s favor.

The end of the game was approaching, and with 10 seconds left on the clock, the home side erupted in cheers. When the game officially ended, the horn sounded, and the team rejoiced in its victory.

“We have an extremely talented group of kids. At the end of the day, our goal is to put a number on the press box and win a state championship,” Corbett said. “I’m very excited to see those kids accomplish that goal. I have a lot of faith in them.”