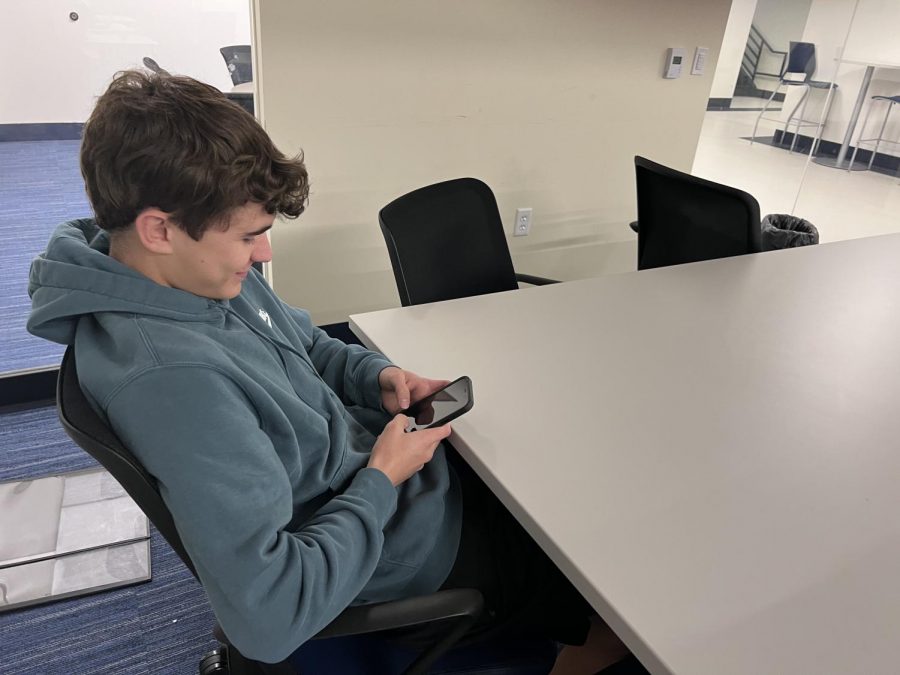 In a study pod, sophomore William Allan scrolls through Instagram during lunch. Despite all the attention on Facebook at the moment, he uses Instagram more than the former. “I don’t use Instagram too often, but I use it a lot more than Facebook, that’s for sure," Allan said.

After 17 years since its debut, Facebook, the multibillion dollar Silicon Valley-based company, has suddenly changed its corporate name to Meta.

Corporate rebrands are rare, oftentimes being a sign that a company is reworking its internal structure or a sign that they are trying to distance themselves from some sort of negative stigma.

Though this change might resemble that of Google changing their name to Alphabet in 2015, there are potential distinctions that hint towards different factors being at play.

Alphabet’s former chief executive officer Larry Page claims that their reasoning for changing their name was to unite their widening interests and product lines, something that has been reflected over the years with the Google Pixel and Deepmind.

Facebook, on the other hand, has become the subject of extensive controversy throughout the decade due to their spreading of misinformation and the transparency of user’s personal data.

Some people, such as former Facebook employee Frances Haugen, believe that Facebook has been rebranding itself in an attempt to disassociate with those principles rather than to simply expanding their company.

Haugen acted as a whistleblower and leaked internal documents that she had gathered throughout her two years of working with the corporation in order to expose secrets about the company that were not formally known to the public. The documents that she leaked revealed the fact that the company was actively aware of harm that it was causing and made the conscious decision to not make changes.

“I definitely think that a big part of it was this whistleblower story coming out and the negative press that has been coming out,” marketing expert Melanie Lederman said. “I don’t know if they would have changed their name, had this not come out, but I think it’s been a long time coming.”

As a result of the controversy sparked by this leak, many other unsatisfied employees have taken action and leaked other information which gave the company’s reputation a devastating blow.

“The real issue at hand is not necessarily the name of Facebook or that people are bored or even that Facebook needs a new change, I think it’s the fact that here, this whistleblower came out and said that Facebook’s not doing anything to change,” Lederman said. “The fact that there are privacy issues, that there are safety issues, there’s hate speech that isn’t getting taken care of and fake news. Really they have to address those issues before just putting a brand new name on it.”

While Facebook might be rebranding in order to salvage their reputation, there are arguments to be made which support the claim that this rebrand has in fact been made from a purely economical standpoint.

Facebook has been aiming to break out of the social media bubble for a while now with their services such as Facebook Live and Oculus, though most of them have either failed or are recognized by the general public as an independent company under the Facebook domain rather than a subset of Facebook.

“I refer to it as Oculus, not Facebook,” sophomore and virtual reality user Krew Tanner said. “Honestly, I wasn’t even aware that it was owned by Facebook until recently.”

Because of this, Facebook’s rebrand might just be the thing to push them over that hurdle and establish themselves as a top player in the global economy.

According to the Chief Executive Officer of Facebook himself, Mark Zuckerburg, the company chose the name meta because the company aims to invest in the “metaverse” in the future.

The supposed metaverse is the theoretical idea of an interconnected digital world where you can interact with people and socialize as if you are in the real world all within a simulation.

Sophomore Benjamin Martin believes that Zuckerburg’s goal of designing the metaverse is a crude pipe dream.

“People are spending way too much time focusing on how strange the name is, rather than what Facebook is doing wrong,” he said.

In the end, Martin thinks that the decision to rebrand as Meta is not one that people will popularize.

“No one is going to call it Meta,” he said. “No one. Everyone knows Facebook. It’s one of the most ubiquitous platforms out there, but no one knows the metaverse,” Martin said.

That being said, he recognizes the power Facebook has not only in the realm of social media, but in the business world as well. He fully expects the company to stay as relevant as it has all these years no matter what changes it makes.

“I think whether you like it or not, they just have so much,” Martin said. “[They have] so much talent, so much experience in the industry that we will likely see at least bits and pieces of some form of Facebook letting on far into the future.”