Warner Brothers' "Dune" does not disappoint 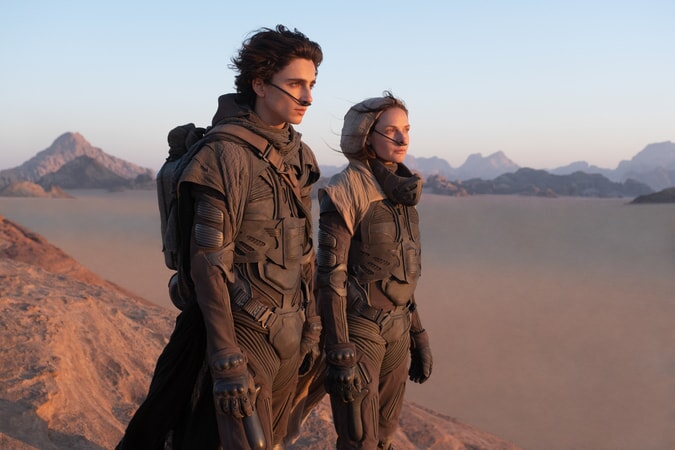 "Dune" ranked second in the country's box office its opening weekend. The movie stars Timothee Chalamet in the title role.

“Dune” draws audiences into a realm of science fiction the second it starts.

The movie revolves around two groups of people. The Harkonnens are an obscenely rich group who appear clad in all-black suits and masks. The other group is the Fremen, people native to the movie’s main setting, planet Arrakis. The two sides have been fighting over land as the Harkonnens intend to mine in Arrakis for spice, causing conflict.

Paul Atreides, played by Timothee Chalamet, is tasked with protecting the future of his family, the House of Atreides. The Atreides’ are the rulers of Arrakis.

The first thing that caught my eye were the costumes. Jacqueline West was recruited by the movie’s director Denis Villeneuve to be one of the movie’s costume designers. West has such a wide spectrum of what she can design, making the costumes my favorite element.

The movie’s costumes consisted of about 2,000 various designs. Even more impressively, West and her team created a series of “Stillsuits,” a “Dune“ garment created to use the body’s moisture to convert it to drinkable water as the film takes place mostly in the desert. These Stillsuits were form fitting and had to be handcrafted for all of the actors specific heights and measurements.

The costumes added to the immersive experience, and the well-made garments pulled me into the futuristic world.

Another impressive aspect was the film’s background. Unlike most big-budget science fiction movies, not all the backgrounds were created using a green screen. The movie’s filming took place in Jordan, the United Arab Emirates, Norway and Hungary, with directors clearly putting in the effort just to make “Dune” seem as realistic as possible.

A different interesting aspect was the movie’s soundtrack. Hans Zimmer produced three soundtracks for the movie and it comes packed with vocals and string instruments. The music made everything feel real, and several times I could feel shivers run down my spine. Zimmer used everything from Indian bamboo flutes to distorted guitar noises to capture the sci-fi feel for the breathtaking soundtrack.

Despite these great aspects, the movie was difficult to digest, and as somebody who hasn’t read the books, it was hard to comprehend the plot. It felt like I would have needed to have previous knowledge of the story line to fully understand the movie.

Not only that, but the ending felt like it ended much less mid-book and more of mid-sentence. There was a confusing drop off, and I wish there was more for me to predict for the 2023 sequel. “Dune” isn’t something I would wait two years for, trying to remember the many plot points.

Another big critique of the film I have was the promotion of Zendaya having a major role in the movie yet having very little screen time in the actual movie. Zendaya is front and center in advertising, however the Los Angeles Times estimated she only was on-screen for 7 minutes out of the movie’s 2-hour-and-35-minute runtime.

Zendaya is expected to play a larger role in the next movie, but her role as an advertising piece disappointed me, as I expected such a hit actor to appear more in this movie.

“Dune” has so much potential for the next movie, and although the ending fell flat, the next movie is planned to revisit the fascinating spice trades and wars. I loved “Dune,” and despite minor issues with its endings and misleading advertising, it’s the kind of movie audience members would leave the movie theater from, turn to their friends, mouth agape and tell them it’s their new favorite movie.